PINK, the debut album from Bad Colours, is the Maradona of electronic/garage. It may be compact, but it packs a mighty punch. Gordon Rutherford reviews for Louder Than War.

There’s a saying that good things come in small packages. If ever you wanted evidence, Bad Colours provides it with his debut album, PINK. At just over twenty-one minutes, it’s one of the shortest albums I have ever encountered. However, not a second is wasted. This incredible fusion of garage, funk, post-disco, house and rap may be small, but it packs a mighty big punch.

The man behind the Bad Colours moniker is London-born, Maryland-raised, Brooklyn based DJ and producer, Ibe Soliman. For over a decade, Soliman has been one of New York’s premier league DJ’s, sharing the decks with the likes of James Murphy and Mark Ronson. He has curated some of the hippest private parties going, setting the tone for FKA Twigs, Justin Timberlake and Usher. And when he’s not performing behind the decks, he’s in the studio, on production duties for Kendrick Lamar, Faith Evans and many more. Enough said. Soliman knows his stuff.

When covid-19 came crashing down, Soliman, like so many of us, had to adapt. DJ sets were impossible. Studios were closed. Realignment was required. Inspired by some rough ideas and samples that had been sent to him by friends, he decided that he would make music, as opposed to playing it. He leant on all of those influences that he had nurtured over the years, carefully curating sounds and ideas from his vast library of source material. The excellent end product is PINK. 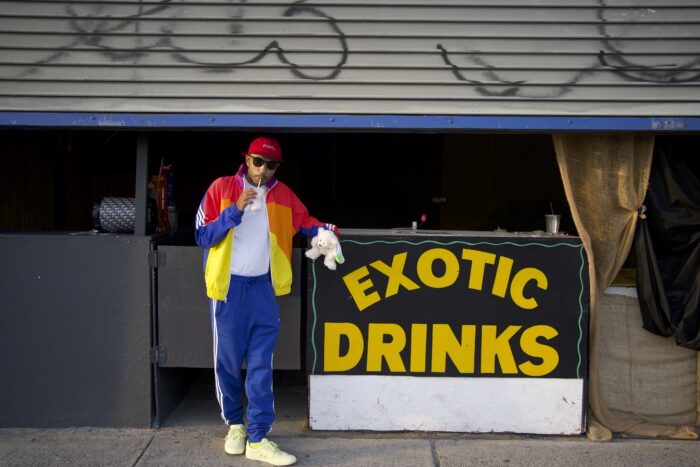 PINK is an album of nine tracks, four of which are (virtually) instrumental and diminutive, all clocking in at under two minutes. They are almost like interstitials, linking the ‘real’ songs as opposed to being songs in themselves. That’s not to say that they lack purpose or, critically, quality. They serve an outstanding role in creating the dynamic of the collection and are absolutely valid in their own right. The perfect example is the synth-laden slow jam, Heyyy, which serves as a perfect bridge between tracks.

Taking the other five tracks, there is not so much as a bum note here. Each and every one is quite brilliant. The album’s first single, Cookin’, is built upon a throbbing house beat and a Chris Faust sample. Carras Paton enters proceedings a couple of minutes in, introducing mean and moody sax layers. Following on from the short intro, PINK, Cookin’ provides a brilliant introduction to this collection.

Feelin’ Like follows. It’s a track that was originally built around a vocal sample by Jarv Dee that morphed and grew thanks to additional lyrics on black power from the Seattle rapper. With a nod to Ronseal, Soliman describes it as “dancey stuff with a message”. It’s a tune that oozes attitude and swagger. Hypnotic beats hold you transfixed as Jarv Dee does his thing.

Skin To Skin opens with a skittering hi-hat and a bassline that is so good it should be illegal. A faraway guitar kicks in, provided by Alex Kliment from Foreign Tapes. It is reminiscent of Marc Ribot (Tom Waits) or Chris Isaak. It seems tot be there, but not there and provides a quite beautiful counterpoint to the main theme of the tune.

The highlight of the album however is unquestionably the out-and-out banger, Get U Off. Quite simply, this is the one. It is a collaboration with the super talented singer, actor and playwright, Marcus Harmon, who wrote lyrics and provides a sumptuous vocal performance. Get U Off is an absolute club classic, reminiscent of those pioneering house anthems of the eighties whilst at the same time having a very contemporary, Róisín Murphy kinda vibe. You can imagine the very biggest dancefloors pulsating to this.

PINK is the aural equivalent of an optical illusion. On one hand, it feels over way too soon. Yet, at the same time, because Soliman sets the bar so high, you feel utterly sated by the end. Sure, a little bit more would be nice, but this way, Bad Colours leave us hungry for more. Here’s hoping that there is fresh material to follow soon.

PINK is available for pre-order on Bandcamp.

All words by Gordon Rutherford. More writing by Gordon can be found in his archive.

My Favorite Spanish Song Of 6ix9ine

Humanity’s First Hotel in Outer Space Will Have a Concert Venue...